The algorithm is a recipe for performing a specific task. With algorithms, we meet in everyday life at every step, often without realizing it.

In the morning, we brush our teeth by roughly following the scheme below:

In a similar way, you can describe dozens of activities performed every day, or provide algorithms for their implementation. Each of these rules tells us how a certain initial state of a particular system can be transformed into the desired final state (dirty teeth -> clean teeth, raw eggs -> scrambled eggs).

In mathematics and informatics, we also call the algorithm a recipe that tells us how to do a certain task, achieve a specific goal. At the same time, however, we formulate to this provision some strictly defined requirements that must be met in order to be called an algorithm:

The algorithm is an orderly, finite sequence of unambiguously defined activities whose completion in a finite period leads to the solution of the task.

An example of a mathematical algorithm, finding the absolute value of a number

Ways of writing the algorithm

The algorithms can be presented in various ways: descriptively, in points (so we have done so far), using the instructions of the chosen programming language or graphically, using generally accepted symbols. The latter method is very popular, Below are the symbols that we will use to write the algorithms:

The input or output block of the algorithm. It presents the action of entering data into the algorithm (eg read: x), as well as outputting the results and messages received (eg, write: y * 5). With an input/output block, exactly one incoming and one outgoing arrow is associated.

Once we have learned the symbols used to graphically present the algorithms, we can draw the previously described algorithm for finding the absolute value of the number: 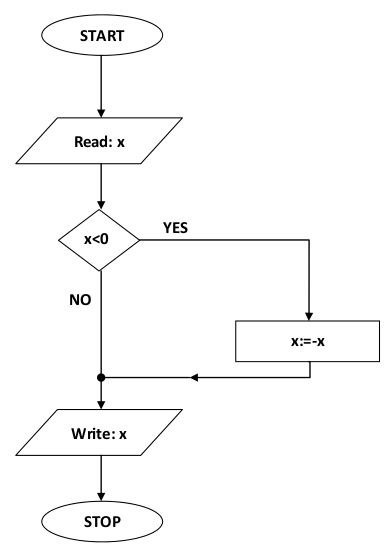